You wake up in a cold chamber. As your senses begin to clear, you realize it's slowly getting warmer, and you're encased in a metal tube with a glass front. Beyond the glass, you can see a row of similar tubes, each with wiring and tubing running from them, each containing another being. Some look human, some look monstrous, but they're all waking up, just like you. After a couple minutes of this, the glass door opens, and you can finally take your first steps into this world.

What do you do?

For In Memoriam, players chose from prefabricated character sheets with no knowledge of their backgrounds. These characters woke from cryogenic storage to find the world has ended, they have super powers, and they've lost all memory of their past. This is an open-world campaign, in which the challenges they face are chosen by them and, often, created as consequences of their own decisions. Somewhere out there are answers to who they are, what happened to them, and how it relates to the end of the world; it's up to them to find those answers, and decide what life they will live in light of them. 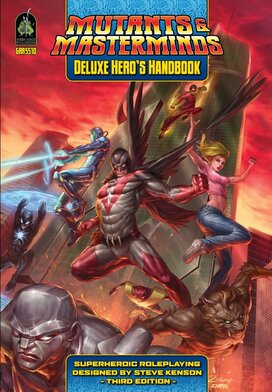 Mutants & Masterminds is a tabletop roleplaying system created by Green Ronin Publishing. It uses a d20-based system that is easy to pick up for those familiar with other d20 systems, like Dungeons & Dragons, and relatively simple to explain for new players. Unlike other d20-based systems, Mutants & Masterminds relies exclusively on d20s, with effects handled through resisted checks and stat-based difficulties, and results following degrees of success or failure.

The system is designed to run superpowered campaigns, and the rules are structured toward the end goal of facilitating gameplay that flows like a comic book. Damage is simplified and resisted in such a way that characters can take a hit and keep fighting back, a wide array of power effects enable players to build their own powers in varied and unique ways, and players choose the path of their character's growth rather than having it defined by class or race definitions. Characters advance by gaining Power Points during sessions, and spending those on the point-buy system that determines all of their abilities.

All of this is augmented by Hero Points and Extra Effort, system features that allow characters to really flex their position as superheroes (or villains). Hero Points are earned in game by characters, and can be spent to bend the rules in select key ways to help characters accomplish their goals. Extra Effort allows a character to push beyond their normal limits for a brief time in exchange for gaining fatigue until they literally push themselves to collapse. In the game as designed, Hero Points are awarded by the GM when character complications interfere with the character's goals and thus add nuance to the story; in our campaign, I have instead elected to allow players to award Hero Points (one per session per player) to each other as an acknowledgment of ways they have improved the game experience.

Gameplay began in post-apocalyptic New England, near the border of modern-day New Hampshire and Massachusetts. It's been about five years since the last great war, in which mutants and world governments fought one another in a terrible global conflict that claimed millions of lives and only ended when the world itself began to break. For reasons as yet unknown, reality suddenly shifted and cracked. People vanished, holes opened between realities, monsters appeared, and nations began to collapse.

The game began in a region called Concordia, a region occupying large portions of former Massachusetts, Vermont, and New Hampshire that do not fall under the direct rule of any regional governments. Large settlements claim varying degree of control over their surrounding lands, but most of the region is unclaimed and fallen back into a wild state. The alliances and enemies the party makes will impact the political stability of the region as well as the future of the people who live there.

In Memoriam is played by two different groups of players. These two groups exist in parallel timelines, meeting for the first time in the reality-hopping crossover event for Extra Life 2021. Since then, they have established a shared interdimensional headquarters and occasionally communicate or offer support across dimensional borders, but mostly deal with the problems that arise in their own timelines. One of these groups plays weekly online, with game hosted on roll20. The other group gathers in person less frequently, but for longer sessions, and uses a mixture of physical dice/sheets and roll20.

Most character images were created using HeroForge. Roll20 tokens are used for characters for whom players have not submitted images. Only information that has been learned in-game is presented.

In Memoriam is presented as a livestream on my Twitch channel. The online group plays on Thursday nights at 9 o'clock Eastern (US) time. The offline group meets on a less regular basis, but sessions will be announced on my calendar and in the Discord. The archive of our videos is currently being moved to this site. Click the button below to watch.
Video Archive